I play an executioner—a “dishonest” man.

The executioner describes how he became one, his work and his on-going, unsuccessful attempts to find a woman who will marry him. The friendly executioner also sells magic amulets and potions. He’s fearful of witchcraft, devil’s work and living dead.

The tour to the enchanted locations of Rothenburg doesn’t require the eeriness of the dark. After all, people were also superstitious during the daylight.

The executioner will explain to you why…

You’ll also learn the story behind the ‚executioner’s meal‘ and what were considered ‚lucky executions‘. You’ll hear the fearful tales of ‚damned executions‘, the return of souls as “Poltergeists” and even of the living dead. And who could forget the legends of the ‚Headless Horseman‘ and blood-thirsty vampires?

I’ll tell you about the fight against witches and the devil, and what occurs during the ‚witch dance‘ on ‚witch mountain‘ on ‚witch night.‘

The tour begins in the Marketplace (Market Square). Registration or an advance booking isn’t necessary. The tour need minimum 4 people.

SPECIAL TOURS for groups: You can also book a private tour and meet your own ‚personal‘ executioner (Price: 83 euros / Meeting point: Market square). 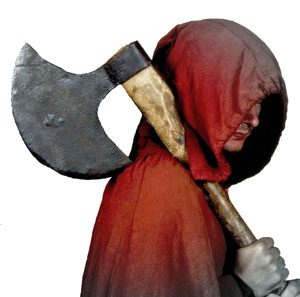